According to Florida law, both case law and Florida Statutes there are very specific criteria to be followed in order to modify child custody.

There is a bias toward upholding the original custody order and it is not to be modified absent these specific factors.

First, the basis for modification of child custody must be due to a change in circumstances that was unforeseen at the time of the original order.

Second the change in circumstances must be material, and substantial.

Material and substantial are not so clearly defined under current law, and are subject to judicial discretion and legal precedent.

The Movant, the one asking for the change, is held to an extraordinary burden of proof supporting his claims of the change in circumstances.

Only after the extraordinary burden of proof, that there has been a substantial and material change in circumstances has been met, may the court decide whether a custody modification is in the best interests of the child.

Modification of Child Custody
Summary of Precedent and Florida Statutes

Absent a finding that the change in circumstances has in fact been substantial and material, a modification of custody is not warranted.

In Cooper the wife, who was the moving party, alleged as a basis for substantial and material change in circumstances that:

(1) parties do not effectively communicate with each other;

(2) former husband was sometimes unable to care for the children (due to his serious illness);

(3) children desire to live with their mother;

(4) it is in the children’s best interest to live with their mother.

In Cooper, the Court found that:

(2) the father’s illness was in remission rendering his inability to care for his children due to his illness a moot point;

(3) the parties did not have an agreement included in the final judgment stating that the issue of child custody would be revisited at a specified later date, such as the children’s entry into school;

The wife further argued that when a party alleges a change in circumstances the Court is obliged to examine the issue of best interest of the children as if it were ruling on an original custody determination. The Court disagreed.

unless otherwise provided in the final judgment, the two-part substantial change test used in Cooper applies to modification of all custody agreements.

In Wade the father’s assertions that there had been a substantial and material change in circumstances were upheld as follows:

(1) evidence of parental alienation of the father by the mother;

(3) violation of shared parental responsibility as evidenced by mother’s unilateral change of the child’s elementary school and the child’s therapist;

(4) mother was in contempt of Court for her actions relative to visitation.

In San Marco v San Marco, 961 So 2d 967 (4th DCA 2007), substantial and material changes in circumstances that resulted in custody modification are:

(1) father took the child to the doctor ten times -- the mother only once;

(2) mother failed to provide the child with appropriate medical care by refusing to have the child inoculated for chicken pox and failing to keep other vaccinations current;

(3) there was more structure in the father’s home and the child would have her own room and bathroom there;

(4) if the child lived with the father she would not have to be placed in after-school care;

(5) mother had moved several times since the divorce and the father’s home would provide a more stable school environment;

(6) father had “a superior capacity and disposition to provide the child with medical care”;

(7) mother’s frequent moves resulted in the child not having a stable and satisfactory environment. Custody modification was granted to father, with one judge dissenting.

Other Factors Considered in Custody Proceedings

In reviewing these cases it seems that a combination of several change factors is most likely to constitute a substantial and material change in circumstances.

In Ogilvie v Ogilvie, 954 So 2d 698 (1st DCA 2007) the Court held that the parties failure to communicate; or the relocation of one or both of the parties; are factors that are each insufficient, by themselves, to constitute substantial or material change.

However, the Court noted that “parental alienation” by itself may be sufficient to prove substantial and material change.

Similarly in Morales v Morales, 915 So 2d 247 (5th DCA 2005), the Court found that, an acrimonious relationship alone, between former spouses is not substantial change.

The pertinent part of the Florida Statutes is as follows:

§ 61.13 Support of children; parenting and time-sharing; powers of court.--

(3) For purposes of establishing or modifying parental responsibility and creating, developing, approving, or modifying a parenting plan, including a time-sharing schedule, which governs each parent's relationship with his or her minor child and the relationship between each parent with regard to his or her minor child, the best interest of the child shall be the primary consideration. Determination of the best interests of the child shall be made by evaluating all of the factors affecting the welfare and interests of the minor child, including, but not limited to:

(a) The demonstrated capacity and disposition of each parent to facilitate and encourage a close and continuing parent-child relationship, to honor the time-sharing schedule, and to be reasonable when changes are required.

(c) The demonstrated capacity and disposition of each parent to determine, consider, and act upon the needs of the child as opposed to the needs or desires of the parent.

(d) The length of time the child has lived in a stable, satisfactory environment and the desirability of maintaining continuity.

(e) The geographic viability of the parenting plan, with special attention paid to the needs of school-age children and the amount of time to be spent traveling to effectuate the parenting plan. This factor does not create a presumption for or against relocation of either parent with a child.

(f) The moral fitness of the parents.

(g) The mental and physical health of the parents.

(h) The home, school, and community record of the child.

(i) The reasonable preference of the child, if the court deems the child to be of sufficient intelligence, understanding, and experience to express a preference.

(j) The demonstrated knowledge, capacity, and disposition of each parent to be informed of the circumstances of the minor child, including, but not limited to, the child's friends, teachers, medical care providers, daily activities, and favorite things.

(k) The demonstrated capacity and disposition of each parent to provide a consistent routine for the child, such as discipline, and daily schedules for homework, meals, and bedtime.

(l) The demonstrated capacity of each parent to communicate with and keep the other parent informed of issues and activities regarding the minor child, and the willingness of each parent to adopt a unified front on all major issues when dealing with the child.

(m) Evidence of domestic violence, sexual violence, child abuse, child abandonment, or child neglect, regardless of whether a prior or pending action relating to those issues has been brought.

(n) Evidence that either parent has knowingly provided false information to the court regarding any prior or pending action regarding domestic violence, sexual violence, child abuse, child abandonment, or child neglect.

(o) The particular parenting tasks customarily performed by each parent and the division of parental responsibilities before the institution of litigation and during the pending litigation, including the extent to which parenting responsibilities were undertaken by third parties.

(p) The demonstrated capacity and disposition of each parent to participate and be involved in the child's school and extracurricular activities.

(q) The demonstrated capacity and disposition of each parent to maintain an environment for the child which is free from substance abuse.

(s) The developmental stages and needs of the child and the demonstrated capacity and disposition of each parent to meet the child's developmental needs.

(t) Any other factor that is relevant to the determination of a specific parenting plan, including the time-sharing schedule. 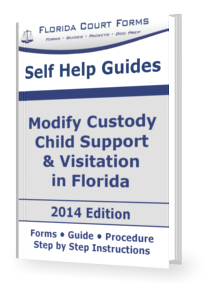 The Self Help Guides' Modifying Child Custody & Visitation in Florida helps you navigate the court process and procedures once you file your documents with easy to follow checklists, links to websites, important addresses & phone numbers, and much more.

The Self Help Guide includes easy to follow step by step instructions, all the required & supporting forms, filing procedures & checklists, complete guide to the Parenting Plans, easy to understand and written in plain English.

Your documents will be in your hands and ready to file at the courthouse in 3 days or less! We guarantee our work.

This site accepts advertising and other forms of compensation.
All content on this site is for informational purposes only and is not legal advice.
© Copyright 2008 - 2019, The Petition Preparer, LLC